A Lesson from Exodus 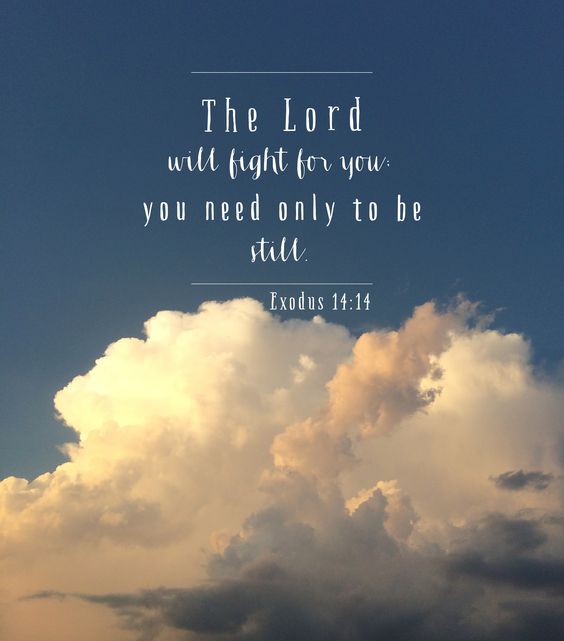 Contextually, Moses is speaking to the Israelites after they fled Egypt and saw their former captors right on their tail. At this point in the story, the Israelites had been wandering back and forth in the desert (Exodus 14:1-3) so that Pharaoh would see their apparently aimless wandering and pursue them (Exodus 14:4). And sure enough, that’s what happened (Exodus 14:5-9).

So we have this scene:

And now, they’ve been in the wilderness for a time already… only to look up and see the Egyptians coming after them with seriously so many chariots and soldiers.

The Israelites start grumbling about this sudden turn of (scary) events (Exodus 14:10-12). So Moses speaks up (Exodus 14:13-14) and tells them (in paraphrase), “Stop being such a scaredy cat. God will help us and you’ll never see these Egyptians again. Chillax.”

And then we see God perform YET ANOTHER mighty act: He tells Moses to stretch his rod over the sea so that He can part it and the Israelites can walk right on through on dry land (Exodus 14:15-22). So that’s what happens.

We all know the rest of the story. What happens when the Egyptians try to follow? God messed up their chariots, drowned them, and… well, that was the end of that (Exodus 14:16-28).

Right in the middle of that big section where God is ruining the Egyptians, we get a glimpse into their minds. Verse 25b says, “… and the Egyptians said, ‘Let us flee from the face of Israel, for the LORD fights for them against the Egyptians” (emphasis added).

Even the Egyptians – those idol worshiping, pagan people who had enslaved God’s chosen people for hundreds of years, who held them captive for forced manual labor – even they saw that God was fighting for the Israelites.

In the last two years, we’ve seen God protecting our family and showing us unmerited grace and favor. He has faithfully provided our financial support, met unspoken needs and spoken needs, encouraged our hearts and continued to lead us.

But we’ve also looked up and seen the Egyptians coming after us in the form of an endless to do list, busy weeks of school and work, illnesses that last forever and a day, vehicle troubles, and more… all while trying to faithfully follow His leading. Much like the Israelites following Him out of Egypt.

As I read this passage in Exodus this week, God reminded me that maybe He has us wandering the desert just so that people can see that God is fighting for us. Maybe it’s so that we get to showcase His power and magnitude, His strength and might.

Moses reminds the people in Exodus 4:14 that God will fight for them – it’s a reminder filled with hope and peace and encouragement. And the Egyptians reiterate that same exact thing, except filled with fear and anxiety, because they are on the losing end of that battle.

God is fighting for us.

As we select and put a deposit on a shipping container this weekend, God is fighting for us.

As we purchase more items on our packing list, God is fighting for us.

As we seek connect people with what God is doing in West Africa, He is fighting for us.

As we stare wide-eyed at all the decisions we have yet to make, God is fighting for us.

And we pray that people around us will also be able to iterate that God is fighting for us.

May we ever display His power and might, may we ever submit to His leading, and may we always follow Him.

2 Comments on “A Lesson from Exodus”

Well, Hudson fell and hurt his arm the other day and has been complaining about it hurting. Today, Melissa is taking him in to be checked out. Please be praying it is nothing serious and will not need any major treatment (or a plethora of doctor visits).
The last week felt like a hundred days long, but alas, it is Friday. We’re wrapping up the week with some French tests today and preparing for the weekend ahead (studying French and family time). You can find some of our favorite moments for the past seven (not a hundred) days and the kids’ latest MK story on our blog. Click the link in our bio and select “blog” to find them.
Our big focus of prayer today is (1) for healing for Clara, she broke the growth plate in one of her toes this weekend; and (2) for Muslims around the world as the enter Ramadan, that they find Jesus during this time. You can read more about it on our blog today, click the link in our bio to find it.